I am writing to alert you to a potential property tax increase coming from the Georgia General Assembly.  House Bill 711, sponsored by Rep. Mary Margaret Oliver (D-Druid Hills), seeks to add a special tax district to cities formed after 2005.  Rep. Oliver believes that newly formed cities owe, what she refers to as, “pension legacy costs”.  The notion that these legacy costs exist is false and here’s why.

House Bill 711 is only directed at newly formed cities.  It is punitive, based on false assumptions, and is not congruent with the facts.  Make no mistake about it, it is a discriminatory tax aimed at Brookhaven and Dunwoody.  It is a bailout that would allow DeKalb County to continue poor fiscal management.  It creates a liability for new residents and business for a service they never received.  Imagine an entirely new property tax layered onto the commercial engine of the region – the Perimeter market – and the affect that would have on business, growth, and sales tax revenue to the county, schools, and state.  House Bill 711 is wrong and would have dire economic consequences for the region and state if passed.

House Bill 711 is currently in the House Governmental Affairs Committee.  Here is a list of emails for the members of that committee and the committee staff.

First, DeKalb County’s millage rate isn’t one millage rate that funds all aspects of the county.  DeKalb’s total millage rate is actually the sum of various component millage rates.  I often refer to these individual rates as “buckets”.  Here’s a list of some of the “buckets” for which you may pay a millage rate:

Sanitation and watershed services are self-sustaining and charge a fee-for-service for unincorporated county residents as well as residents of cities.  Newly formed cities have all continued using DeKalb as their sanitation service provider.  Water is only provided by the county so all cities use, and pay, for this service.

Planning and Sustainability is a self-sustaining, fee-for-service fund that provides the plan review services to residents and builders who need permits.  This area also handles business licensing services.  Dunwoody and Brookhaven now provide this service as a city.

Since the incorporation of Dunwoody and Brookhaven, residents of these cities have continued to pay fully into the General Fund, the Fire Fund, the appropriate debt service, and they continue to pay into the self-sustaining funds of sanitation and watershed.  So, the only services that these cities no longer receive, or pay for, from the county that are funded by property tax millage rates are: (1) Police, (2) Roads and drainage, and (3) Parks and Recreation.

In January, I posted this blog about education spending and results in Georgia.

In May, the US Census office released updated per pupil spending numbers. I have updated my regional map with these numbers, along with Georgia’s tax climate ranking, poverty ranking and the percentage of students receiving free/reduced lunch.

Per Pupil Spending and Graduation Rates 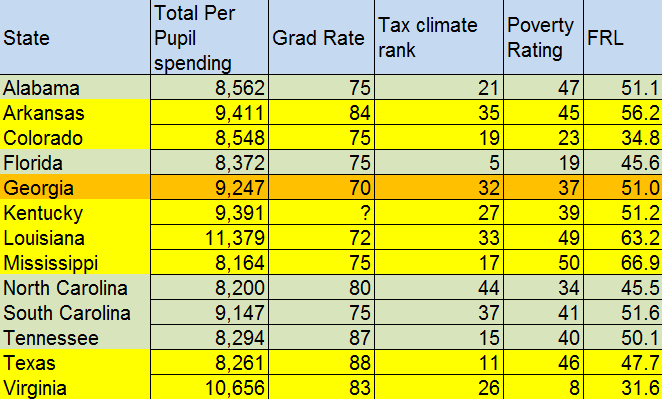 What is Grover Norquist Referring To?

Local Boards of Education are required to publish tax and expenditure data. See https://ted.cviog.uga.edu/ted/Default.do . Don’t know what Grover Norquist is referring to, but it appears [you are] campaigning on something that is already there.

What’s up with that?

Follow the money.  That phrase was popularized during the Watergate tumult.  It is also a wise directive for all taxpayers in our state and beyond when it comes to how we spend your tax dollars on education.

So, what happens when you can’t “follow the money” because the government and the Iron Triangle Education Bureaucracy puts obstacles in your way?  The Cato Institute has released a study about the transparency in spending by departments of education.  It turns out Georgia earned an “F”.  Click here  to see their study. About Georgia, Cato points out, “Georgia is missing the most recent year of expenditures and fails to provide a table or graph that would allow citizens to easily compare changes in spending over time.”  In fact, Georgia is missing the most recent 2 years.  The financial data that is provided through the state DOE website is the 2010-2011 school year – a full 2 years behind our current fiscal year. (School districts have fiscal years that run from July 1 through June 30.  The fiscal year is referenced by the year in which it ends.)  So we are missing FY12 and FY13 on the fiscal reports.

Until we fix the financial issues that plague Georgia’s educational spending, we won’t fix education in our state. Unfortunately, Georgia’s Department of Education has not held districts accountable for how they spend your tax dollars.  It appears the DOE’s only retort is to ask for more of your money.  Our DOE continues to send hundreds of millions of your dollars to districts that do little to improve the educational lives of our children or even provide transparency in their expenditures.  It’s all a bit cozy.  Sadly, administrators have grown their take of your money over time and let smaller amounts accrue to the teachers in the classroom.  Dr. Scafidi’s study, The School Staffing Surge, on how administrative staffing has grown over time in excess of student growth.  In an upcoming “Coffee Talk”, we’ll cover the finances of education in Georgia and how they have hurt taxpayers, students and teachers all while benefiting the educational bureaucrats.  Follow the money, indeed.